A can of sardines is a cupboard staple that quite often is easily forgotten. You can turn it into a spicy creamy spread in 10 minutes. A fork and a bowl are all you need as kitchen utensils. A food processor is not required unless you prefer it really smooth. I personally prefer it with a bit of texture. Oil-packed sun-dried tomatoes are excellent to “mascarade” the fishy taste of the sardines and to give the pâté an appealing orange/red color.

If you have time prepare it at least 2 hours in advance to allow flavors to meld. Overnight is best. Piri-Piri is a hot chili sauce, popular in Brazil, Angola, Portugal, and especially Mozambique from where it originates. 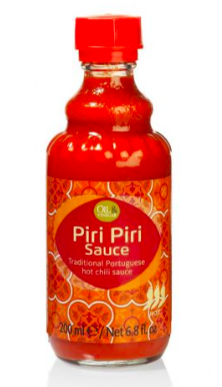 Birdseye chili, the pepper Piri-Piri is made off, originally came from the Americas. It was brought to Spain and Portugal after the discovery of the Americas. From there it found its way back to Brazil and then to the Portuguese African colonies. It was in Mozambique where the Piri-Piri sauce made its initial impact. The word “piri piri” simply means “pepper pepper” in the local lingua franca. In 1974, after the wars of independence, Portuguese settlers moved from Mozambique to Portugal, Brazil and South Africa and brought the beloved sauce with them. It became a huge success, especially after the Portuguese owned South African fast-food chain Nando’s used it for its signature dish “Chicken Piri-Piri” in its over 1000 outlets in Europe and North America. Available in the US from most well-stocked supermarkets like Publix and Whole Foods as well as World Market.

Drain sardines from their oil and place them on paper towels over a cutting board. Split them open and remove the tiny backbones. Place fillets in a bowl and mash them roughly with a fork. Add shallot, sun-dried tomatoes, and mayonnaise by the tablespoon until well mixed. Taste for salt and pepper. Add lemon juice and Piri-Piri to your liking. Garnish with the scallion rings.

Enjoy the pâte with crackers and crudités as an impromptu dinner party starter or on toasted baguette rounds with salad greens as a light lunch. 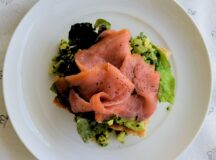 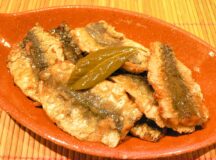 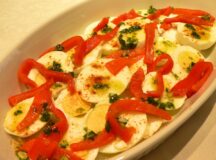